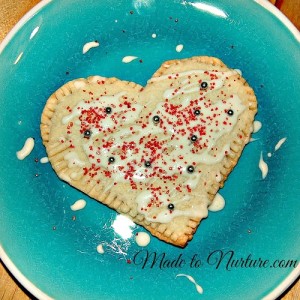 Apparently my children love Pop Tarts, something which I’ve only bought once, butsomething they always ask for when we go down the cereal aisle at the grocery store.  One day, I really had enough of hearing them ask and the sound of disappointment when I said “No”, and then a light bulb went off in my head, and I said, why don’t we try to make some? Of course, they said, “Yes, can we? How do we do it?”  Thus the discovery of how to make Homemade Toaster Tarts (Pop Tarts) came about. And a wonderful discovery it has been. Homemade Pop Tarts/Toaster Tarts taste WAY better than the store bought ones.

Now, we, like most families, lead a pretty busy life. I don’t have a whole lot of time to bake with them, so when we can find a quick, easy, yummy thing to make, we’re all over it. All you need for this recipe is pie crust, jam or jelly, icing (optional), and sprinkles (also optional). If you don’t have time to make pie crust, you can use pre-made pie crust. The first time we made them we used 9″ pie shells. It was a bit more expensive than I had wanted, but unfortunately the grocery stores where we live only have pre-made pie shells… The second time, I just made my own pie crust, which took a bit more time, but was worth it cost wise and taste wise. I ended up making a double batch of pie crust so that I could freeze some to have the next time we wanted to make them.

I say the icing and sprinkles are optional, because my son loved them plain, without the extra sugary topping. He gobbled them up so fast, I had to hide a few so that I could decorate it for photos! 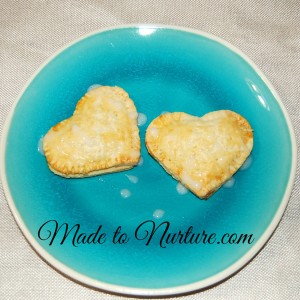 Toaster Tarts (aka Pop Tarts)
An easy to make, alternative to store bought Pop Tarts. **Prep time will depend on whether you are making them with pre-made pie crust or not.
Ingredients
Pie/Tart Pastry
Toaster Heart Tarts
Icing
Servings:
Instructions
Tart Pastry
Making the Toaster Tarts
Icing
Recipe Notes

There are many types of fillings you can put into these yummy toaster tarts. Below is just a few options.

If you want a chocolate icing, add 1 tbsp unsweetened cocoa powder and 1 ounce chocolate to the icing recipe.

If you want a chocolate pastry, add 2 1/2 tbsp of unsweetened cocoa powder to the pastry recipe.

Have recent posts sent directly to your email!

On this Blog page are some affiliate links from which I receive a commission if you click on their link and make a purchase. Made Nurture is also a participant in the Amazon Services LLC Associates Program, an affiliate advertising program designed to provide a means for sites to earn advertising fees by advertising and linking to amazon.com.

How to be a stay home mom on one income

© Made to Nurture 2014-2015. Unauthorized use and/or duplication of any material on this site without express and written permission from this blog’s author and/or owner is strictly prohibited.